Why use seismic ground vibration analysis?

Strategically collapsing and imploding buildings may seem a straightforward operation—place explosives at a certain distance and stand clear—but when you consider the logistics, it becomes a bit more complex. Nearby buildings must remain undisturbed, foundations must remain intact, and the surrounding geography must not be disrupted beyond its limits. More than just safely removing structures, demolitionists must also consider the state of what remains, especially if the site is being prepared for new construction. Always near the top of a demolitionist’s list of concerns is the effect of controlled explosions and equipment on the earth. The integrity of the ground must be maintained as a general rule, both for the conservation of the natural habitat and for the safety of all current and future structures/infrastructure.

Ground vibration analysis measures the effect of vibrations on the ground through tools or explosives or any other means. It can be seen as the manufactured parallel of natural earth vibrations that are studied by seismology. Both sciences apply similar methods, using elastic waves to differentiate between natural force and that which is generated by machines. In the case of this article, ground vibration analysis refers to the anticipated effect of vibrations on the natural earth, to be completed through simulation.

As subterranean structures like plumbing, basements, and subway tunnels are vulnerable during demolitions, the earth that supports these structures must not be displaced by the resulting vibrations. Safely executed demolitions avoid displacing the earth to the point of instability and collapse. Seismic waves provide information about structural debris in the soil within a given radius, which informs decisions about the risks for controlled explosions and equipment that might operate in the area. As a result, analysts can form a clearer picture of subterranean obstacles, leading to increased accuracy of dependent demolition models. Model accuracy is the foundation of effective demolition planning, providing visual source material for proofs and backed by empirical numeric data. 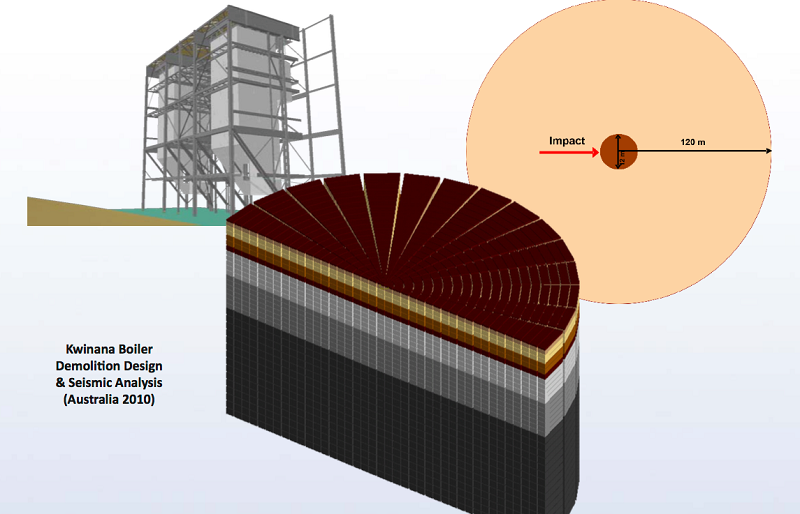 As part of ASI’s design, analysis, and planning services for demolition operations, 3-D models are used to map target demolition sites to within a negligible margin for error. The use of seismic ground vibration analysis is part of this process. ASI’s models can determine the radius of subterranean impacts, as well as the displacement of underground soil. Resulting models are more accurate than those calculated using less intensive methods according to comparisons between measured estimates and actual demolition data.

ASI uses its patented Extreme Loading® for Structures technology (ELS) as part of a Seismic Retrofit Analysis and Engineering services. ELS modeling uses the Applied Element Method (AEM) to render the effects of seismic activity, considering both past and future impacts on many types of structures. Underground power lines, water pipes, support beams, and other utilities can be integrated into the overall analysis, as well as static structures like crates and pallets. For businesses and utility buildings, the usefulness of seismic ground vibration analysis extends beyond demolitions to earthquake proofing, disaster readiness, and forensic engineering.

ASI is an organization dedicated to the understanding of materials and structures, who seek to continuously improve the methods we use to design, build, maintain, rehabilitate, and demolish buildings. Information gathered from tools like seismic ground vibration analysis feeds a collective of operations, many of which are geared toward ASI’s unique 3-D Nonlinear Dynamic Structural Analysis. Through this process, ASI is able to render 3-D sequential demolitions for all the most common methods like wrecking balls, explosives, and excavators.