Evaluation of a Construction Defect 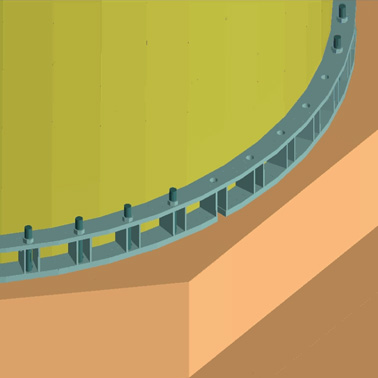 During the construction process of a deethanizer vessel, several design mismatches between the anchor bolts and base plate holes were observed. To complete the installation process, the vendor widened and slotted nine holes in the base plate and removed three anchor bolts. In addition, several anchor bolts were damaged and several others were subjected to excessive heat during the torching/cutting of several bolts. This raised concern about its safety and structural integrity.

ASI was tasked to provide a comparative model and analysis of the structure using our in-house structural analysis software, Extreme Loading® for Structures. The objective was to compare the as-designed case with the damaged as-built case with regard to wind and seismic loading.

ASI created a 3-D model and explicitly modeled all damaged portions and compared the behavior with the designed case. Based on the analysis, ASI was able to assure the client that the as-built structure met project level of safety requirements for design loading conditions.