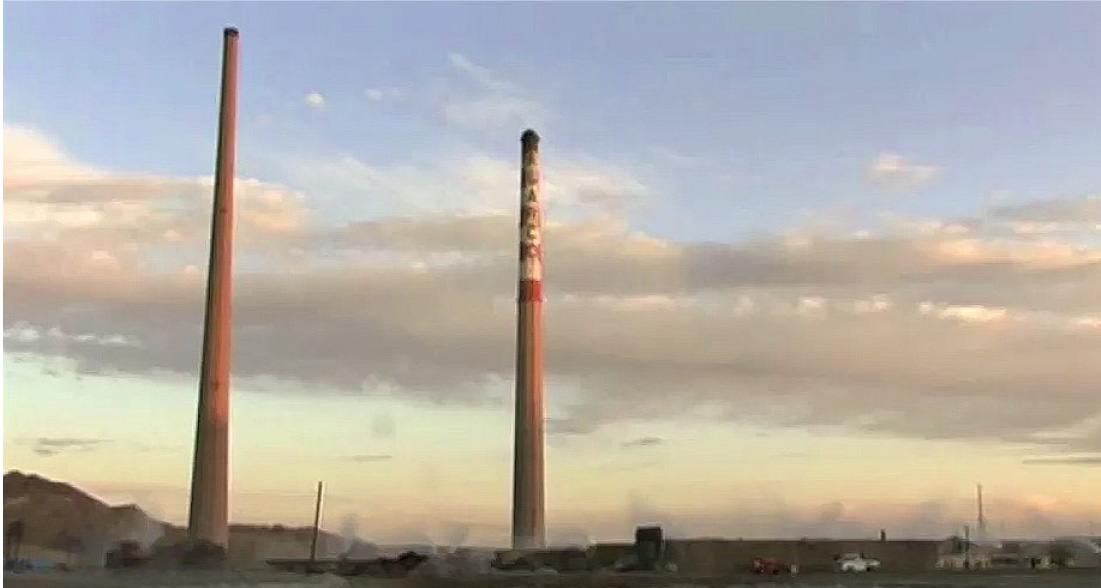 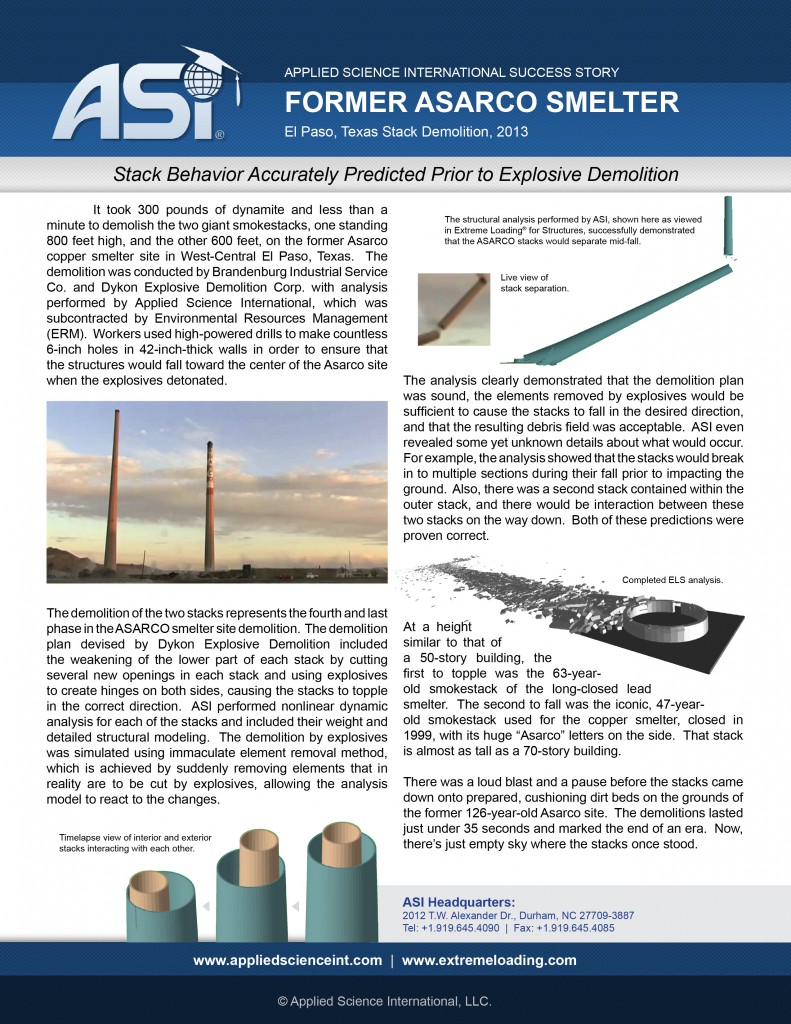 ASI was contracted to perform the demolition engineering and design for the explosive demolition of the Asarco Smelter Stacks.  Once the nonlinear dynamic analysis was performed, It took 300 pounds of dynamite and less than a minute to demolish the two giant smokestacks, one standing 800 feet high, and the other 600 feet, on the former Asarco copper smelter site in West-Central El Paso, Texas.

The demolition was conducted by Brandenburg Industrial Service Co. and Dykon Explosive Demolition Corp. with analysis performed by Applied Science International, which was subcontracted by Environmental Resources Management (ERM). Workers used high-powered drills to make countless 6-inch holes in 42-inch-thick walls in order to ensure that the structures would fall toward the center of the Asarco site when the explosives detonated.

The demolition of the two stacks represents the fourth and last phase in the ASARCO smelter site demolition. The demolition plan devised by Dykon Explosive Demolition included the weakening of the lower part of each stack by cutting several new openings in each stack and using explosives to create hinges on both sides, causing the stacks to topple in the correct direction. ASI performed nonlinear dynamic analysis for each of the stacks and included their weight and detailed structural modeling. The demolition by explosives was simulated using immaculate element removal method, which is achieved by suddenly removing elements that in reality are to be cut by explosives, allowing the analysis model to react to the changes.

The analysis clearly demonstrated that the demolition plan was sound, the elements removed by explosives would be sufficient to cause the stacks to fall in the desired direction, and that the resulting debris field was acceptable. ASI even revealed some yet unknown details about what would occur. For example, the analysis showed that the stacks would break in to multiple sections during their fall prior to impacting the ground. Also, there was a second stack contained within the outer stack, and there would be interaction between these two stacks on the way down. Both of these predictions were proven correct.

At a height similar to that of a 50-story building, the first to topple was the 63-year old smokestack of the long-closed lead smelter. The second to fall was the iconic, 47-yearold smokestack used for the copper smelter, closed in 1999, with its huge “Asarco” letters on the side. That stack is almost as tall as a 70-story building. There was a loud blast and a pause before the stacks came down onto prepared, cushioning dirt beds on the grounds of the former 126-year-old Asarco site. The demolitions lasted just under 35 seconds and marked the end of an era. Now, there’s just empty sky where the stacks once stood.