One of the structural engineering services that ASI offers is progressive collapse analysis (aka: Disproportionate Collapse). Our proprietary Extreme Loading Technology® (ELT) uses the applied element method to accurately analyze the behavior of structures under extreme loads and to assess the risk of progressive collapse. This method allows us to track and analyze structural behavior from its elastic stage through cracking, element separation and collision.

Progressive collapse occurs when a local failure spreads throughout a structure from element to element, eventually resulting in the collapse of either the entire structure or a disproportionately large part of it. Progressive collapse is caused by an abnormal or extreme loading event, typically due to accidental impact, faulty construction, foundation failure, or violent changes in air pressure (ie: Blast). Infamous examples of progressive collapse can be seen in such historic events as the terrorist attack on the A.P. Murrah Building and the terrorist attack on the Twin Towers of the World Trade Center on September 11, 2001. 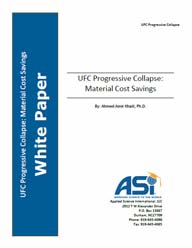